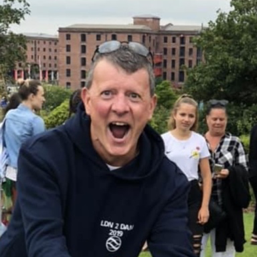 This month we introduce Stewart Sharp who is the father of 3 very talented girls who have all played or do still play with RNC. Stewart has been an integral part of the club starting as a cheerleader on the court sideline and now is part of our coaching team. Stewart brings a huge range of skills and experience and we hope you enjoy finding out more about him.

A long time – 12 years as a supporting parent and the last 3 years as a Coach as well!

RNC is a friendly club with fun people, a bit like the football teams I used to play for.

A combination of my love of team sports and my daughters, Hannah, Lizzie and Rose choosing to play netball. I coached all 3 of the girls at Selsdon Little League over an 8 year period from 2010 and then joined RNC as a Coach in 2018.

Living in Sanderstead, RNC felt like the local team as they trained at Croydon High. Meeting Sara ‘sealed the deal’ and we’ve never looked back.

I have a busy career managing property teams at work as well as having a hectic home life with my large family. I have always been involved with sport and played semi-professional football when I was a lot younger. These days I play golf at a local club which is a bit of a change as it’s an individual, rather than team sport but still very challenging and enjoyable – most of the time!

No matter how old or how good you are, being part of a sports club is both enjoyable and good for you. It’s not necessarily about competing or winning, although that is very nice……..it’s more about spending time with like-minded people.

I have really enjoyed coaching all of my daughters, particularly during the start of their netball careers and we have had a few successes along the way. Hannah and Lizzie’s teams both won the prestigious Senior League at Selsdon Little League. I also coached Rose’s team at Little League but they just missed out on the title and came runners up. We made up for that the following season when Roundwood E won CNL Division 5 – a great team including Rose as an attacking centre court player and me as their Coach. I’m also very proud to have qualified as a UKCC Level 2 Netball Coach in 2018, supported by both RNC and CNL.

Firstly and foremostly, like everyone I am really looking forward to sport starting again, as we emerge from lockdown, finally!! Following that, I’m genuinely excited to be part of the RNC Coaching Team as we start the next phase of the club’s development at Coombe Wood School. I will be coaching the Development Squad on Wednesday nights and look forward to helping Roundwood’s Stars of Tomorrow.