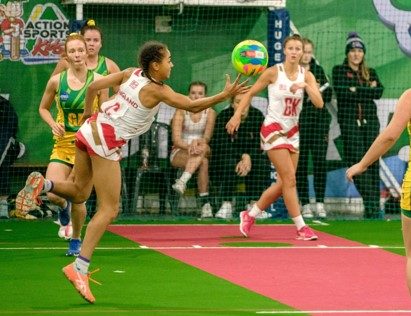 This month we listen to Vanessa (Ness) Beal who is an inspiration to those wishing to pursue netball at a higher level. Ness has played for school, club, county and country! Ness juggles her school work, university applications and her love for netball so read on to hear more.

How long have you been with RNC?
For almost 7 years now!

What is your favourite part of the club?
How close everyone is. No matter what team you are in, we’re all friends. I also love the supportive, motivated and fun atmosphere. Training is always my priority simply because it makes me feel so much better after a long day of work. I also love just being with my team mates and catching up and playing netball together!

What made you join RNC?
Sara used to be my sports teacher at school and invited me to a training session. I haven’t left since.

How did you get into Netball?
I tried it for the first time when I reached high school, and was put into the A team after my first ever go at it. I seem to be good at it and I have never looked back since.

What do you do beyond netball?
I love going to the gym to complement my fitness required as a centre court player but I mainly go to feel good and strong within myself. Netball has taught so much about the benefits of exercise on my mental well-being, and I now always incorporate exercise into my daily routine.

What would you say to encourage others to join any sports club?
Give it a go. If you like it, great! If you don’t, at least you gave it a chance and can move on to find what works best you. You never know unless you try.

What’s your biggest Netball achievement?
Representing England U21s in the Indoor Netball World Cup in South Africa 2019. I have never felt so proud of myself for such commitment to the sport I love whilst enjoying every second of it.

Give us some background on your netball life so far
I started playing netball in Year 7 at school and turned out to be pretty good as I was put into the A team after my try at the game. I then continued with it at school until I was selected to trial for Surrey Academy which I later got into and played for. I then played netball casually for a few years until my sports coach at school invited me and some other girls to the England Indoor Netball (Nets) trials. Through much hard work and seemingly a never ending trial phases, I was selected to represent the U21 team in the World Championships in Cape Town. Playing internationally gave me confidence in myself to pursue something further with my netball. When I got back, I trialled for Surrey Storm’s NPL squad and I got in! However, the commitment of driving almost 2 hours both there and back, training until late and arriving home past midnight on top of my gruelling school work, and keeping up good grades in preparation for university applications was not maintainable. Making the difficult decision to leave this incredible opportunity behind allowed me to find a new dedication to Roundwood and focus all my hard work into the team I love and get on so well with. I am currently just enjoying netball, and working hard with the B team. My time for high level competitive netball will come again soon.

What made you join your super club?
I just love netball so much and my school don’t have a team that plays much so I needed to find a way to satisfy my drive of wanting to play.