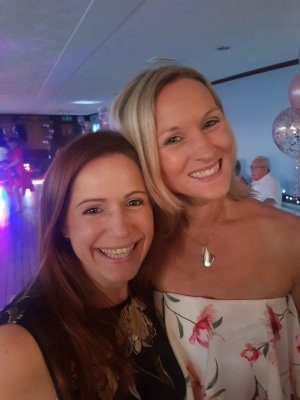 This is our first RNC monthly catch up and each month we will interview a member of our club to give you a deep insight into why they are involved in the club, how they got into netball and what makes them tick!

Our first player is Sara Palmer, aka RNC’s one and only Club Chair and our “Club Hero”.

How did you get into Netball? I started playing netball in Year 6 of primary school. When I moved into secondary school, I met my lifelong best friend Amy (who is part of our Junior Coaching team) and we played GK and GD for the A team for the 5 years we were there.

How long have you been with RNC? I was one of the original 10 people to set up Roundwood back in 2001 in my Dad’s living room. The club was initially run by another lady, but unfortunately the club folded due to financial reasons. After it folded I played for Portas along with 3 of Roundwood’s founding members. The 3 of us were unhappy playing there and felt we could re-establish Roundwood, and so set about contacting previous members to see who wanted to play again. Our first season was 2001 where we started in the bottom division of Croydon and won the league unbeaten for that season.

What is your favourite part of the club? The people and the netball! I feel very privileged to have always been able to welcome such great people to the club and it’s them who makes the club what it is.

What made you take on your role and how long have you been doing the role? When we set up the club I offered to be club secretary, mainly because organisation is my thing and definitely not numbers!

What’s your biggest RNC or netball achievement?  I have so many amazing memories from the 18 years I’ve been at Roundwood. My best include winning 7 tournaments back to back, even when we weren’t in the top CNL division and winning the County League and Regional League play offs, something I never thought possible or ever dreamed of when I set up the club.

What do you do beyond netball? As an avid sports fan and PE teacher, I’ve always been involved in lots of sport. Swimming was my main sport whilst growing up but my other love was squash. Since having children, any free time I have around my netball commitments, is spent with them and my husband Chris.

What would you say to encourage others to join any sports club? Find something you enjoy and commit to it. You never know what you might achieve and you’re never too old to learn something new and improve.

What’s next for you at Roundwood? I hope to be able to play again one day and I really hope to progress my umpiring to the next level soon.