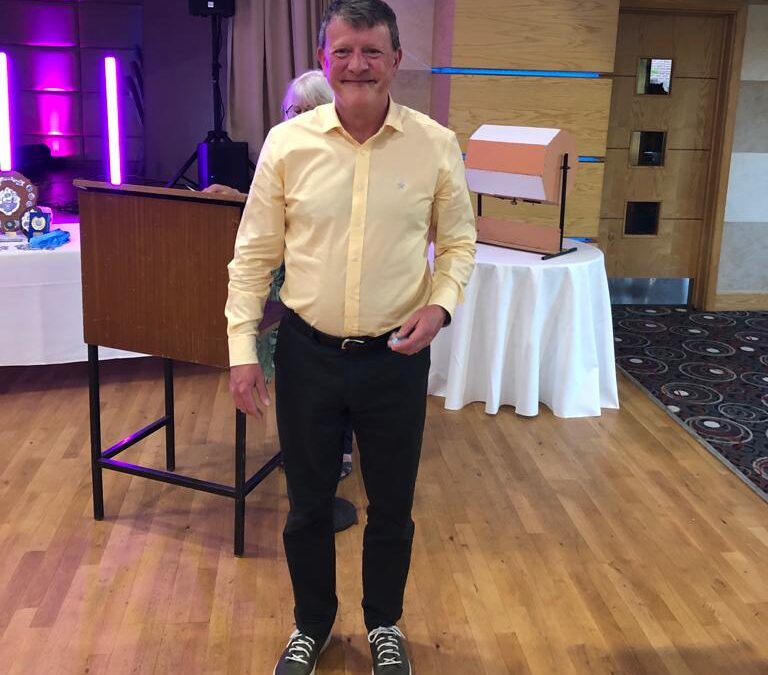 On 21st June 2022 the annual CNL Dinner and Dance was held at the Warren.

The evening was a chance for Roundwood to celebrate a VERY successful season. Our Gold Team received medals as Division 3 winners and the B team were awarded for being Prem B runners up. We also had two individual acheivements economised fir Ava Cately as the most sporting player in Diversion 4 and Nicola Couthwaite was the most sporting player in Division 3. Plus Stewart Sharp was awarded his CNL colours award. He was awarded this recognition as a RNC coach and as a long standing supporter of the club with his 3 daughters all being part of the club.

Here is some of his nomination submission (not written by Stewart!)

Like so many of us, as children we are often inspired to start a sport due to our parents’ interests but sometimes it can be the other way around, where our children’s passions pass onto us as parents. Stewart’s daughters sparked a passion within him to get involved in netball.

Many of the current CNL league players came through the Selsdon Little League and know of Lorna Jones who runs the league. By all accounts she is very good at recruiting people to get involved and help, and this is certainly the case here. It was in the 2010-11 season when Stewart’s eldest daughter started playing in the league which drew him into managing the team she played for, and this continued for 8 seasons, dedicating each Saturday morning to managing teams playing in the league.

When Hannah joined a local club, again Steward was keen to get involved. For those of us who run a club, we all know that volunteers can be hard to come by, so anyone offering to help is invariably grabbed with both hands!  When the offer to run a junior team in both the Nonsuch and Croydon Junior League was presented, it was an offer too good to turn down.

In 2017-18 Steward joined the coaching team at Roundwood, coaching the U18 section and managing the E team, who went onto win Division 5 of CNL that season. Inspired by this success he went onto complete their Level 2 Coaching qualification in November of 2018.  In the following season he predominantly coached and managed the D team, but also assisted in managing the E team when time permitted with the fixture times and venues.

The time that is volunteered on a weekly basis is invaluable. The girls are coached in a way that is targeted to their needs according to observations made during Saturday league matches. The team is managed in a fair and objective manner, and the members of the team are cohesive in their ambition to achieve the desired result.

Last season the club expanded its junior section and Steward has yet again been instrumental in enabling this to happen. This season he has managed and coached our Roundwood Gold team and have led the team to win both their Met and CNL divisions.

When he’s not managing a team on a Saturday he even finds time to travel around London and South East region supporting Lizzie playing in the Regional team at Roundwood.

Passion, commitment, and charisma are all traits that Stewart  brings to his coaching. The club nominated him for his CNL Colours as he is thoroughly deserving of them in recognition of his years of volunteering, at both Selsdon Little League and Roundwood. We are incredibly lucky and grateful to have such a committed dad who can pass on his passion to our members.

It’s so great to have dads involved in Netball and Stewart is a role model to any father’s out there who would like to get involved. Netball is not a sport for females, it’s a sport for all and Stewart has shown that you don’t have to have played the sport to successfully coach and manage a team.

A quote from his wife Helen, which I think sums up Stewart’s approach nicely. “If he had a son, he wouldn’t have hesitated to manage a football team so why not manage a netball team”.