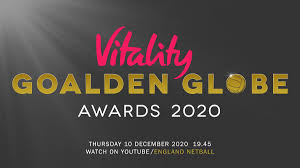 The club wants to send an enormous congratulations to Amy who has won the Vitality Regional Goalden Glove Award for Grassroots Coach of the year! These awards celebrate all netball volunteers who have delivered outstanding contributions to netball across the country.

On 10th December 2020, Amy will be part of the National Awards so we have everything crossed for Amy who could become a national winner! The awards evening will be a virtual awards ceremony. The awards start at 19.45 with the ceremony lasting approximately 75 minutes. There will be special guests involved in the night too! The ceremony is open to all so you can view the night unfold via the England Netball YouTube account – a link will be shared very soon.

The following awards will be announced on the night

Good luck Amy for the 10th December and THANK YOU from everyone at RNC especially our Little R’s and Development players who have benefited the most from your dedication and superb coaching ability!